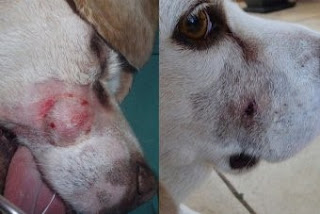 PHOTO: A dog called Oscar pre-treatment with the berry compound (L) and 15 days after treatment (R).
(Supplied: QIMR Berghofer Medical Institute)
Usually when you treat a tumour it takes several weeks for it to resolve, but this is very, very rapid.
Dr Glen Boyle
Scientists have been surprised by the rapid cancer-fighting properties of a berry found only in Far North Queensland.
An eight-year study led by Dr Glen Boyle, from the QIMR Berghofer medical research institute in Brisbane, found a compound in the berry could kill head and neck tumours as well as melanomas.
An experimental drug derived from the berry, EBC-46, has so far been used on 300 animals, including cats, dogs and horses.
Dr Boyle said in 75 per cent of cases, the tumour disappeared and had not come back.
“There’s a compound in the seed – it’s a very, very complicated process to purify this compound and why it’s there in the first place, we don’t know,” he said.
“The compound works by three ways essentially: it kills the tumour cells directly, it cuts off the blood supply and it also activates the body’s own immune system to clean up the mess that’s left behind.”
There were no side effects, but what amazed scientists most was how fast it worked: the drug took effect within five minutes and tumours disappeared within days. 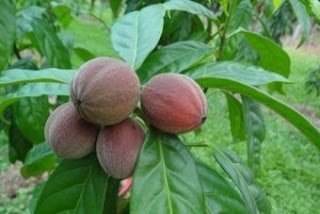 PHOTO: The EBC-46 drug was derived from a berry that grows on the blushwood tree.
(Supplied: QIMR Berghofer Medical Research Institute)
“The surprising thing for us and the thing that we don’t see very often is the speed with which this occurs,” Dr Boyle said.
“Usually when you treat a tumour it takes several weeks for it to resolve, but this is very, very rapid.
“There’s a purpling of the area, of the tumour itself, and you see that within five minutes and you come back the next day and the tumour’s black and you come back a few days later and the tumour’s fallen off.”
The berry grows on the blushwood tree, which only grows in pockets of Far North Queensland.
“The tree is very, very picky on where it will grow,” Dr Boyle said.
Extracted from:

The information contained in this post is for general information purposes only. The information is provided by BLUSHWOOD BERRY - CANCER FIGHTING BERRY and while we endeavour to keep the information up to date and correct, we make no representations or warranties of any kind, express or implied, about the completeness, accuracy, reliability, suitability or availability with respect to the website or the information, products, services, or related graphics contained on the post for any purpose. for purchase information contact at Whatsapp Number 6281360000123 - Batu Geliga Landak