The Deputy Prime Minister said the Felda Biotechnology Centre at Bandar Enstek in Negeri Sembilan would carry out cloning of the TongKat Ali, which contains the active ingredient eurycomanone 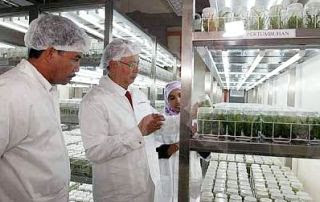 New facility: Najib (centre) visiting the biotechnology centre yesterday. With him is Negri Sembilan Mentri Besar Datuk Seri Mohamad Hasan. He said it would be easy to market the product overseas once quality was maintained through cloning.

“One day, Tongkat Ali Felda will be marketed internationally, even in Harrods of London. The Westerners will be impressed with the quality of Felda products,” he said yesterday when opening the RM25mil centre.

The centre, he added, would also be involved in secondary metabolites research focussing on Tongkat Ali.

“The research is meant to produce the active ingredient of Tongkat Ali without having to grow it in the plantation.”

The centre is the largest biotechnology facility in South-east Asia and also the largest oil palm seed tissue culture centre in the world.

Najib said the facility would also be used to produce banana clones of the Berangan species and other plants.

Later, he told a press conference that oil palm production would remain the mainstay of Felda, although the cloning of plants such as herbs would provide settlers with additional income.

Najib, who is also the chairman of the Cabinet Committee on Felda, said the centre would be able to contribute to Felda becoming a leader in oil palm cloning, with the production of one million cloned plants yearly by 2010, and three million yearly beyond that.

“This will fulfil the vision of Felda to become a global leader and transform its people into a more prosperous community.”

He said the clones would also be able to yield a higher oil extraction rate.

Najib added that a Felda biotechnology advisory committee comprising local and international scientists had been formed and there were currently 120 local scientists at the centre. There are plans to increase the number to 200.

The information contained in this post is for general information purposes only. The information is provided by Bright future for Tongkat Ali and while we endeavour to keep the information up to date and correct, we make no representations or warranties of any kind, express or implied, about the completeness, accuracy, reliability, suitability or availability with respect to the website or the information, products, services, or related graphics contained on the post for any purpose. for purchase information contact at Whatsapp Number 6281360000123 - Batu Geliga Landak